We should be grateful to David McCann for doing the obvious, in this case subjecting Sinn Fein’s performance in last week’s UK General Election to a more rigorous examination and analysis than happened in the hours following the count.

What he discovered with a seat-by-seat analysis, was nothing less than an absolute disaster for Sinn Fein and evidence, perhaps, that the peace strategy developed by the Adams’ camp in the Provos is now running on the political equivalent of  petrol fumes.

The strategy was based upon the theory that grateful constititional Nationalists, happy that Sinn Fein was embracing peace, would flock to the Provo cause in order to sustain and bolster the strategy’s architects so as to strengthen their hand against internal opponents.

There is no doubt that this worked initially but McCann’s analysis tends to show that the strategy is now running out of fuel. Satisfied that the Provos cannot, and no longer wish, to return to war, Nationalist voters are returning to their natural homes, i.e. the SDLP, or even the Alliance Party.

Here is his analysis which shows a significant drop for SF in every constituency bar North Belfast, not least in West Belfast, once the impregnable home of Northern Republicanism.

The media, to its shame, saw only North Belfast and missed the bigger message. In that regard they fell for an SF con, which almost worked. Here is the more detailed breakdown of the SF vote (a minus in every seat bar North Belfast): 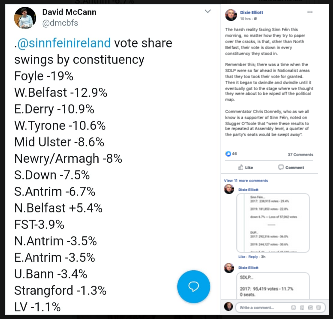